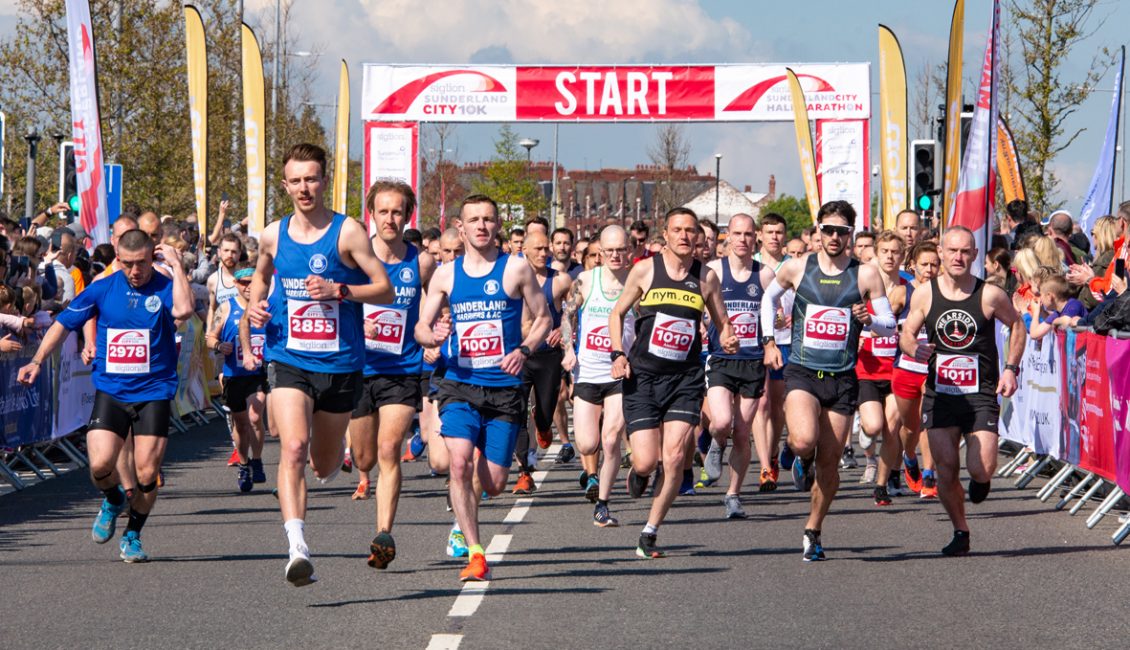 The events kicked off with the inaugural Sunderland City 5K at 6:00pm on Saturday 11 May, the first mass participation event to use the new Northern Spire Bridge.  Almost 600 people signed up for the run and were supported by big crowds on the bridge and around the route on a fine evening.  After a very close race and sprint finish, the winner of the first Sunderland City 5K was Joshua Dack of Lothian Running Club in 15 minutes and 57 seconds, just ahead of Nick Hardy of Tipton Harriers in 15:58.  Sam Beckett of Crook & District AC was third in 16:30.  Local Team GB star Aly Dixon of Sunderland Strollers won the women’s race in 16:52, with Hazelle Webster-Costella of Jarrow and Hebburn AC in second in 19:53 and Sophie Mcphillips third in 20:23.  For Aly, this was the first leg of a double header – along with many other participants, she had signed up to take on the Bridges Challenge by running the 5K and then either the 10K or half marathon the following morning.

Sunday saw hundreds of youngsters start proceedings by running the Active Sunderland BIG 3K.  Hot on their heels, a large field lined up for the Siglion Sunderland City 10K.  The race was won by Oliver James of Sunderland Harriers in 31:32, followed by clubmate Liam Taylor in 33:14, with James Meader of Heaton Harriers claiming third in 33:22.  The women’s race was won by Wendy Chapman of Sunderland Strollers in 39:24, with fellow Stroller Amy Callaghan second in 41:06 and Alexis Dodd third in 43:13.

Taking part in the 10K on behalf of event charity partner St Benedict’s Hospice was local fundraiser Colin Burgin-Plews who swapped his famous Big Pink Dress for a blue and sunflower dress in the colours of the local charity. Crossing the finish line carrying an overflowing bucket of charity donations, Colin said, “I love this race!”

The Siglion Sunderland City Half Marathon was won by Stephen Jackson of Elvet Striders in 1:10:31, with Daniel Alexander of Gateshead Harriers second in 1:10:40 and clubmate Conrad Franks third in 1:10:57.  The women’s race was won by Phillipa Williams in 1:16:41, with 5K winner Aly Dixon of Sunderland Strollers second in 1:20:32 and Claire Mcmanus of North Shields Poly third in 1:28:24.

“It’s been a brilliant weekend of running in Sunderland.  The Northern Spire Bridge was a spectacular setting for the first Sunderland City 5K and it was a wonderful sight to see hundreds of runners charging across it.  Then the weather on Sunday morning was amazing – the sun brought out the biggest crowds of supporterswe’ve had here, all around the course,and they created a fantastic atmosphere and inspired some excellent performances in all of the races.  Congratulations to everyone who ran this year and once again, we’re grateful to Siglion, Sunderland City Council, our other sponsors, and to all of the volunteers who help make events like this possible.  With four distances over the weekend, we now have runs for all ages and abilities, which is all set up very nicely to 2020, which will see the tenth year of the Sunderland City Runs.”